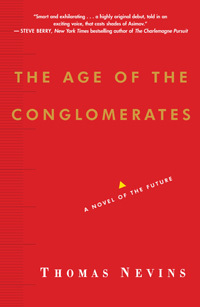 The Age of the Conglomerates

I have spent the last few years writing a novel about America’s possible future entitled, The Age of the Conglomerates. It is set in a time when the corporate culture has consumed the culture at large and the political administration of the nation has been assumed by the private sector. The economy is shattered and society holds accountable the generation responsible for the unpaid debts that have brought on the collapse. The elderly become the sole reason for society’s problems and are the target of group scorn on a massive scale. The Coots, as the elderly are labeled, are removed from their homes and lives and placed in government run communities for reasons of cost control and family relief. The practice proves a success and the precedent is set to exclude another family problem, the troubled youth. So the Conglomerates set policy to discard the disorderly, the Dyscards, and start anew with a child conceived as a result of advances in genetic corrective surgery. This idea got me wondering what an America like this would be like and how the Conglomerates, the name I give the political party, marshal their message and accomplish their goal? The answer was marketing: subtle, deep, sensational and endless. They would market their campaign of economic martial law and exclusionary social structure as not only socially acceptable but as forward thinking and, in fact, right. Censorship and propaganda would be administered by a power well versed in the social science of marketing. And censorship could be subtle when the message was completely consumed. I thought about privacy and individual rights in a time when the identity was captured and stored in profiles and browsing histories. Could one make an independent decision when the selection is limited to a preconceived result? What would it be like to live in a time where one purchased convenience with individual liberty? I thought of a society so adept at advertising that it was able to fill the senses to the point there was no space, time, or emotion for an original, different, or opposing point of view. I wondered, “what if this entire process seemed perfectly acceptable because from my earliest age I had been personally directed to what worked best for me? My fashion, how I appeared, the games I played, and the content I read?” As those of us who live and work with young people know, the future is now. And the only way I can know anything about the future is from what I know now. Can it really be so different?

The human condition and matters of the heart are ageless, even in The Age of the Conglomerates. The individual can and will triumph over the collective consciousness. But, it is an individualism built on the strength of relationships to, and with, other individuals, and how they communicate with one another to piece together their personal victory over the will of the state. The technique my characters use is one of direct communication, conversations, and writing: from poetry, to diary, to email (sound familiar?). They speak to one another, they write and they listen. I guess that too is the same in any age. As we all deal with new media in a time when it is not new to some, the techniques have changed but communication is the same. Direct from one’s heart to another’s.

Praise for The Age of the Conglomerates:

“A highly original debut novel, told in an exciting voice, that casts shades of Asimov. In a story that is multi-dimensional and psychologically intuitive, futuristic imagination and hard fact are finely woven into a smart and exhilarating story.”